That’s because for the last several years, the global clean water crisis has been a topic that has become woven into the fabric of the students and faculty, thanks to a conversation fifth grade teacher Brandy Garbaccio had with her class one afternoon.

“Four or five years ago, we were talking to our fifth graders and they said, ‘We really want to make a difference in our community.’ So I said, ‘Ok, we can bring in blankets and canned goods, and that’s great. But what’s the basis of life?’ And we all agreed; Water.”

This kicked off a journey that would start locally and grow to become a much larger effort as time progressed.

“After that conversation with the kids, I knew there was a community association meeting across the way from Crozet Elementary. So that night I ran over there and said, ‘Look, I’ve got a bunch of fifth graders here that want to make a difference. They have a lot of skills, and we just want to partner them up with businesses and see how we can make a difference,'” Garbaccio explains.

“And so we started locally. There was so much construction going on in the area, and so we began by doing things like water testing and we worked with the Department of Environmental Water Quality and planted riparian buffers, the kids were doing everything they could on the local level.”

But soon, students would discover a new aspect of water that they hadn’t previously known much about – The global impact that a lack of access to clean water can have.

“Two fifth graders were reading about girls in Africa and how they were sacrificing their education so they could collect water to bring home to their families. All the students were amazed, they couldn’t believe these people are sacrificing so much every day for water, and not even clean water,” says Garbaccio.

“We showed pictures of five year-olds holding containers full of water on their heads and you could see it was heart-wrenching for the students. Based on our quick research, we figured the containers were approximately 40 pounds and they walked approximately three miles to collect the water. So we all took turns trying to carry 40 pounds by putting blocks in a basket and placing it on our heads, just to see how cumbersome that was.”

When it was over, the students had a new goal.

Garbaccio soon found Waterboys, with its local ties to Virginia through founder Chris Long and the impact Waterboys was making in East African communities in need, it was a perfect fit for Crozet students to reach their goal of making a global impact.

The 2019-2020 school year was even dubbed “The Year of Water” at Crozet, and students read the book A Long Walk To Water by Linda Sue Park, which tells the story of Nya, an 11-year-old girl from South Sudan who walks eight total hours a day to fetch her family water from a pond.

“The students really connected with Nya. And they were fascinated by the fact that water exists there, it’s right beneath everyone’s feet, but they just can’t get to it,” Garbaccio says.

“The kids said, ‘We want to make sure we get the word out,’ and so they designed t-shirts in an effort to encourage donations to the Waterboys mission. They wanted everyone to know that Crozet was about bringing clean water to people in need.” 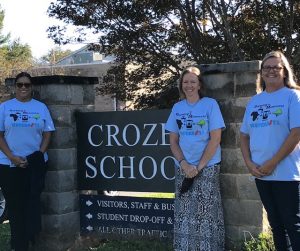 The Crozet fifth grade class set a goal early in the school year to raise $10,000 for the Waterboys mission, and even planned and organized several events and fundraisers to spread the word and raise money. But in March, the COVID-19 pandemic hit and threw a wrench into their plans.

“We had so many things planned and we were so excited and laid such great groundwork.”

But a pandemic hasn’t stopped them; Garbaccio says that even as students were adjusting to virtual learning, their main focus was still on clean water. So far they’ve still managed to raise nearly $1,000 of their $10,000 goal and they don’t plan on stopping now. 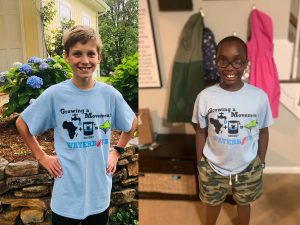 “We’re all human beings, and we all need a connection,” Garbaccio says.

“And these students made a connection with people they don’t even know. These lessons have stuck with them.”