Sometimes the best birthday gift is the gift of helping others. Just ask Fiona Nagle and her boyfriend Doug Green.

An environmental scientist with a doctorate in environmental dispute resolution, Nagle is quite familiar with issues of water scarcity around the globe. And while she is passionate about the cause, she says Green surprised her one night with a comment on the issue.

“We were watching the [Cleveland] Browns versus [Kansas City] Chiefs game a couple weeks before the Super Bowl, and there was a promo about the upcoming Walter Payton Man Of The Year award,” Nagle says.

“Myles Garrett was spotlighted and when he came on, he talked about his work with Waterboys. Doug says to me ‘If I had an extra billion dollars I would put it towards water scarcity and dissolve that entire problem.’ I was very surprised because water scarcity isn’t typically a topic I’ve seen him passionate about, so I was shocked to hear that he had a real interest in this issue.”

But one night during a discussion around his birthday, Nagle had an idea for the perfect birthday gift. Green’s late-January birthday was going to be markedly different this year due to circumstances, but Nagle explains that they decided to make the best they could of it.

“He’s very philanthropic and he’s very generous, he has this massive, massive heart and these huge shoulders, so I thought if we could do some kind of a fundraiser for his birthday, he would really like that,” she says.

Nagle says she immediately thought back to the Myles Garrett segment and remembered Waterboys.

The NFL connection was another aspect that appealed to Nagle for a very specific reason.

Green and his father, Moulton, were both massive Kansas City Chiefs fans, something that had really been a big part of their relationship. Sadly, his father passed away only a few weeks before Green’s birthday, and Nagle felt that Waterboys’ NFL relationship was the final piece of the puzzle that solidified the idea for a birthday fundraiser.

“It was a secret, Doug had no idea I was doing it,” Nagle says.

“We had hosted an online New Year’s Eve party, and so I sent an Evite to that same group of our friends and explained what I was thinking, telling them what was going on, why I was doing it, who the Waterboys are, and just told them ‘Whatever you can contribute would be wonderful. And don’t tell Doug,’” she says with a laugh. 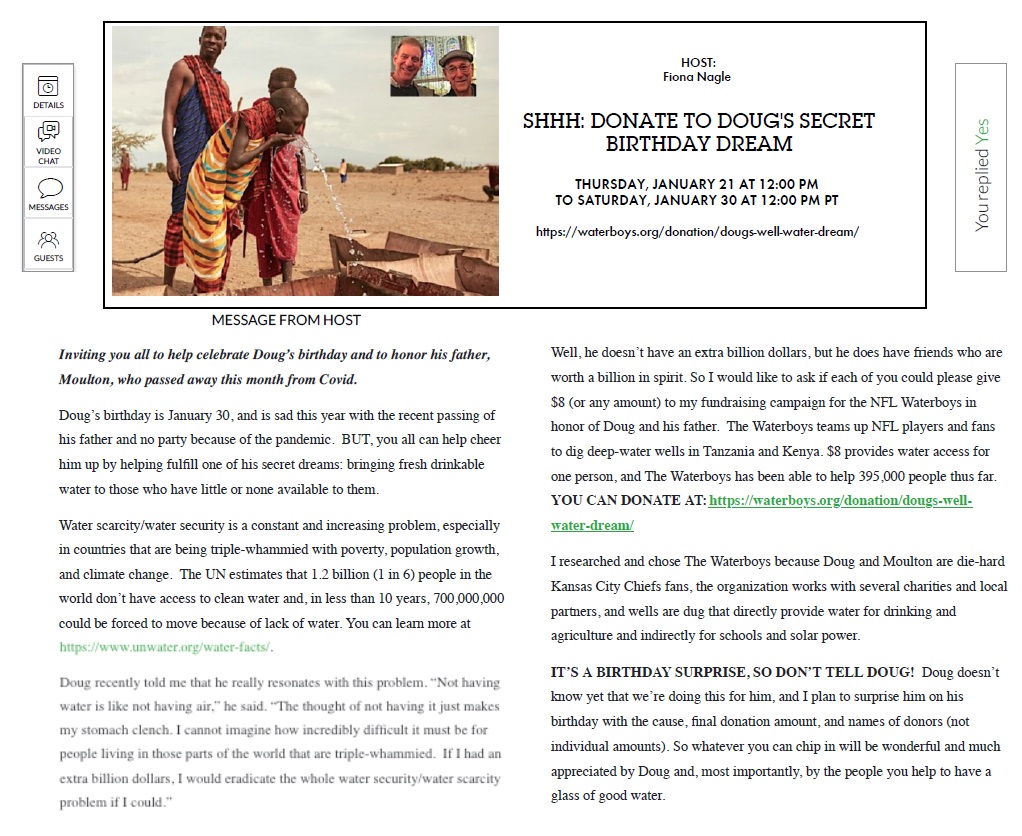 The initial fundraising goal was a simple one: If each of the 60 friends on the Evite list contributed $8 – the amount it takes to bring clean water to one person – they could raise $480 for clean water.

But they didn’t hit their goal. They blew right by it.

By the time the birthday fundraiser ended, the group had raised just shy of $2,000. 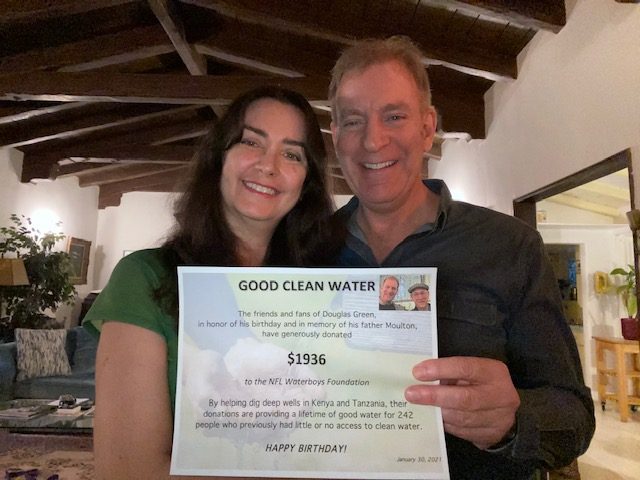 “On his birthday I designed a certificate for the amount that was donated and I printed out what I had written on the Evite and the Waterboys campaign page and then I printed out the names of all our friends who had donated. It was midnight and I told him I have one more thing for your birthday, and I handed this to him. He started reading it and when he got to the end of it, he was just speechless and welled up,” says Nagle.

“He said that it wasn’t just that all of these people donated for his birthday, but also that it was a tribute to his dad. That aspect really pierced him through the heart.”

Nagle says that the response from not only Green, but from their friends as well, was incredible.

“The fact that people felt so good in such a miserable time, with COVID, the lockdowns, the personal situations, to be able to do something like this really gave people a boost, it really gave them that little spark of life,” she says.

She goes on to say that during these strange and difficult times, the need to connect and take care of one another is more important now than ever before.

“It’s about creating those moments, because they’re certainly not being handed to us, and everyone is being affected,” she says.

We’re always interested in gaining insight into new developments and policy issues that affect communities’ access to clean water in the US and abroad. Ongoing learning about water-related challenges and solutions helps us more effectively pursue Waterboys’ big, bold goal of bringing clean water to 1 million people. Here are some things that caught our […]
Learn More
Water Crisis

When military veteran and two-time Conquering Kili team member Kerry Rock first began his journey with Waterboys, he had no idea what was in store for him. “I had no clue what I was about to become a part of, all I knew was ‘Oh my gosh, I’m going to Africa to climb this big […]
Learn More
Story, Water Crisis